This month we celebrate who we are as a diverse community!

Pride is a commemoration of the fight for equality that began on June 28, 1969, as LGBTQ patrons stood up to the harassment and criminalization of our community during the Stonewall Rebellion in New York City. Your continued support of Alaskans Together for Equality (ATE) and LGBTQ equality honors the movement that was started on that hot summer night. We’ve come a long way since that time, but there is further to go.

Recently, we’ve experienced advancements and setbacks on the local and national front. The brief legislative update below will give you insight into ATE’s advocacy efforts with the 30th Alaska Legislature, as well as some local and national events of note. There is more work to be done, but you are moving the needle forward with your support and action!

We’ve also included a brief rundown of ATE volunteer opportunities and Pride events for you in this newsletter.  We hope to see you at one of the great Pride activities or when you stop by the ATE photo booth at Pride to show you are an #EqualityAdvocate. 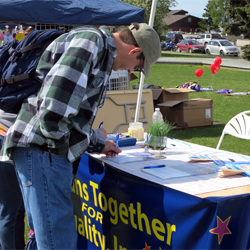 Are you an #EqualityAdvocate? Get your Pride on with ATE at our fantastically fabulous photo booth at PrideFest! We are seeking member volunteers to help us staff our PrideFest photo booth this year! It will be an easy, fun-filled day. Participating as a volunteer is simple – just help booth visitors get all dolled up at our photo booth and help sign up folks who want to get involved with the fight for equality in Alaska. An ATE board member will be with you during your shift – so this is a low stress and high fun opportunity! Interested? Please sign up at PrideVolunteer17. For a full listing of Anchorage Pride’s Fabulous 40 events sponsored by Identity, check out www.anchoragepride.org. 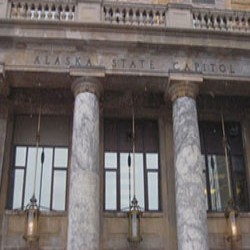 Alaska's  30th Legislative session has been interesting to say the least, and we have had reason to be optimistic that comprehensive fiscal plan for our state is addressed and our long awaited priority bills would finally be heard, voted on, and passed by the newly formed Democratic-led House Majority Coalition and that the State Senate makes forward progress.

HB 20 – an act related to elected officials being allowed to officiate weddings, made it through two committees and is now awaiting a final vote on the House floor.

HB 184 –the statewide non-discrimination bill was finally introduced in the House on the 62nd day of the legislature. It had a single hearing in the State Affairs Committee, and is awaiting a second hearing and vote.  The Senate version of the bill - SB 72 –was heard and a public meeting was held, with a second hearing scheduled. However, the Senate committee was unable to continue the public hearing due to lack of committee quorum. Several Republican Senators declined to show up with the exception of Sen. Wilson (R- Wasilla). Sen. Begich (D- Anchorage) was of course present. This prevented the bill from being heard again.  We would like to thank Rep. Josephson (D- Anchorage) and Sen. Gardner (D-Anchorage) for carrying these two bills along with all the co-sponsors.

In addition, we would like to congratulate Drew Phoenix for his historic nomination to the State of Alaska Human Rights Commission. He would have been the first transgender man to serve on the commission. We were very disappointed to watch the opposition to his nomination. We thank him for his courage and willingness to serve Alaskans.

No other bills were heard or were scheduled to be heard by either the House or the Senate, but we are optimistic that HB 184, the statewide non-discrimination bill will be voted on in House when the legislature reconvenes in January and HB 15, the marriage & spouses bill that would align state statutes with the Obergefell decision, will be passed by the Democratic-led House Majority Coalition and the State Senate.

ATE Is Seeking New Board Members 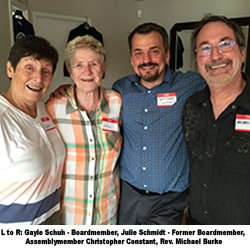 Do you want to help ATE advance equality for all Alaskans? Do you have experience or a skill set that can help take our board to the next level? We are seeking energetic and committed individuals to expand our board of directors. If interested, please submit your professional resume and letter of interest to alaskanstogether (at)gmail.com re: Board of Directors. We will be reviewing resumes and contacting qualified applicants later this summer. Members of the Trans community and Women of Color are strongly encouraged to apply. The ATE board of directors is committed to diversity and ensuring all voices in our community are at the board table. 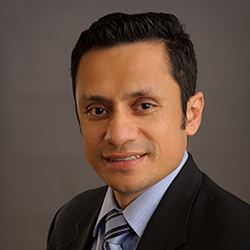 Congratulations to ATE Board President Elias Rojas on being named one of the 2017 Victory Empowerment Fellows! The Victory Empowerment Fellowship is for LGBTQ leaders of color and/or transgender leaders who seek to expand their campaign skills and policymaking power and join a strong cohort of movement leaders from across the country. We are so proud and grateful for all Elias does for equality in Alaska. Way to go Elias! Read more about the 2017 Victory Fund Fellows here. 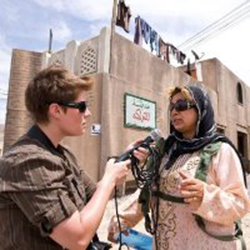 Shelly Wozniak was elected ATE's board vice president at the regularly scheduled May board meeting. Wozniak is a nationally award-winning journalist and communications practitioner, and the owner of Wozniak Communications, a small communications firm specializing in corporate, crisis, and event communications strategy. Congratulations Shelly!