Action Alert: Rep. Don Young Needs To Hear From Us 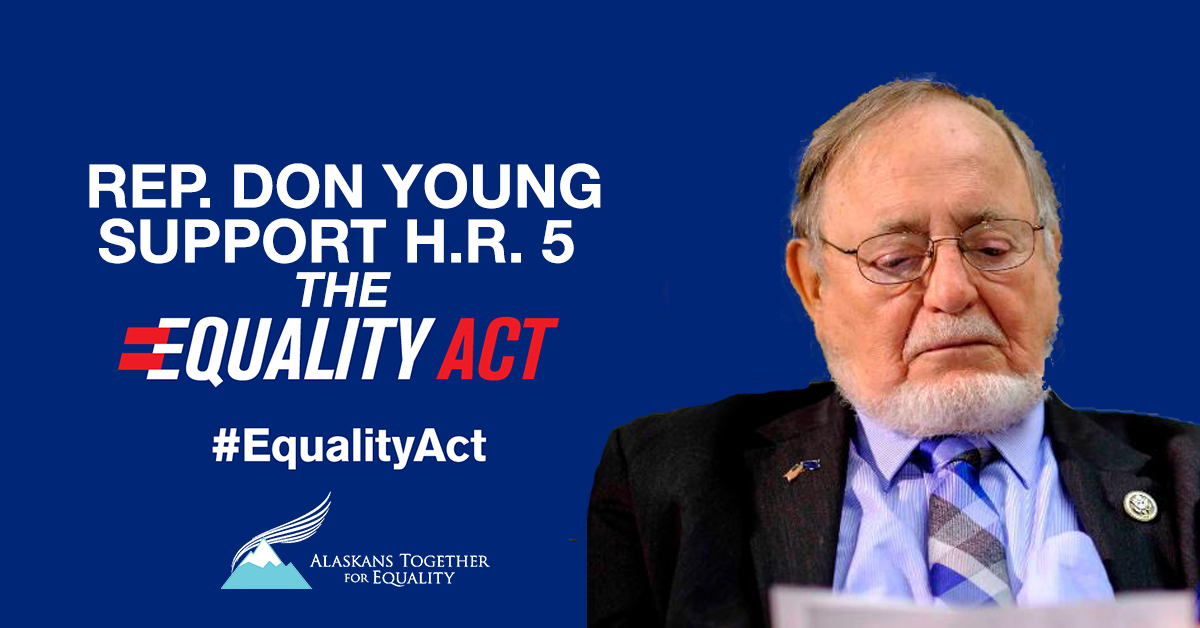 WHAT: H.R. 5 - the Federal Equality Act, this historic legislation, which would secure discrimination protections for LGBTQ+ people at the national level, passed the House Judiciary Committee last week. The bill is now advancing to the full House, where it has 240 co-sponsors from both parties. It’s time to let Rep. Don Young know that Alaskans support equality.

WHEN: NOW (The bill is coming up for debate and a vote this FRIDAY - May 17th)

- Let the staffer know why you are supporting this bill and why Rep. Don Young should do so as well. If you have been discriminated for being LGBTQ+, share your story, if you are willing. There are some suggested talking points and background information below.

**IMPORTANT: Identify yourself as a constituent and provide your full contact information.**

- It's about personal liberty, we should all have the right to live freely without fear from discrimination.

- As Americans, we all share the bedrock values that every person deserves to be treated equally

- Discrimination is wrong. But in 30 states, LGBTQ people are at risk of being fired, refused housing or denied services simply because of who we are.

- Nearly two-thirds of LGBTQ Americans report having experienced discrimination in their everyday lives.

- This is why we need the Equality Act -- federal bill that will add LGBTQ people to existing civil rights laws and strengthening protections for all people -- including women, religious minorities, and people of color.

- Approximately half of Alaska's population is currently protected from discrimination based on sexual orientation and gender identity and Rep. Don Young can fix that. Note: Anchorage, Juneau, Sitka already have similar protections in place - lets get the remaining of the state covered by passing the Equality Act.

- There is broad, bipartisan support for the legislation. A growing majority of Americans -- 70 percent-- support passing these protections, including a majority of Republicans. This legislation was introduced with unprecedented support from hundreds of lawmakers, many leading companies, and more than 180 national and statewide organizations.

At A MINIMUM EMAIL (but doing both helps)

You can email him at: http://bit.ly/repdonyoung

What is the problem?

● Despite significant steps forward, LGBTQ Americans lack basic legal protections in states across the country. The patchwork nature of current laws leaves millions of people subject to uncertainty and potential discrimination that impacts their safety, their families, and their day-to-day lives.

● Around 50 percent of LGBTQ Americans — approximately 8 million people — live in states that still lack statewide legal protections, leaving their residents and visitors at risk of discrimination because of who they are or whom they love.

● Nearly two-thirds of LGBTQ Americans report having experienced discrimination in their everyday lives. While most Americans are welcoming and affirming of LGBTQ people, it only takes one act of discrimination to alter a person’s life, health, and wellbeing.

● Our nation’s civil rights laws protect people on the basis of race, color, national origin, and in most cases, sex, disability, and religion. But federal law does not provide clear, consistent non-discrimination protections based on sexual orientation or gender identity. The need for these protections is clear—nearly two-thirds of LGBTQ Americans report having experienced discrimination in their everyday lives.

What does the Equality Act do?

● The Equality Act would clarify and add sexual orientation and gender identity as protected characteristics to existing civil rights law—including the Civil Rights Act of 1964, the Fair Housing Act, the Equal Credit Opportunity Act, the Jury Selection and Services Act, and several laws regarding employment with the federal government.

● The Equality Act would add sex non-discrimination protections to public spaces and services, as well as federally funded programs.

● Additionally, the Equality Act would modernize the public spaces and services covered in current law to include retail stores, services such as banks and legal services, and transportation services. These important updates would strengthen existing protections for everyone.

● Almost 20 states and more than 100 cities have adopted these common-sense, inclusive and comprehensive protections for LGBTQ people.

● Decades of civil rights history show that civil rights laws are effective in decreasing discrimination because they provide strong federal remedies targeted to address real discrimination. By explicitly including sexual orientation and gender identity in these fundamental laws, LGBTQ people will finally be afforded the exact same protections as other covered characteristics under federal law.

Who supports the Equality Act?

● The Equality Act has unprecedented support from the far majority of Americans, the business community, and major statewide and national organizations.

● The nonpartisan Public Religion Research Institute (PRRI) found that nationally, support for a bill like the Equality Act topped 70 percent, which includes a majority of Democrats, Republicans, and Independents.

● The unprecedented support for the Equality Act also includes strong bipartisan support with reintroduction by Members of Congress from both sides of the aisle — more than ever before — in addition to more than 180 local, statewide and national organizations.

● The time is now to advance this critically important legislation and help ensure LGBTQ people can go to work, raise their families, and live their lives free from discrimination.

● Religious freedom is a fundamental American value, and protecting religious minorities from persecution is entirely compatible with protecting LGBTQ people from discrimination.

● In fact, the Equality Act furthers the principle of religious freedom by expanding and enhancing non-discrimination protections for people of all faiths.

● The current religious exemptions available under federal civil rights law will be unchanged.

● It is also important to note that religious freedom is not a license to deprive others of their civil rights.