Alaskans Together For Equality Statement on the Federal Equality Act 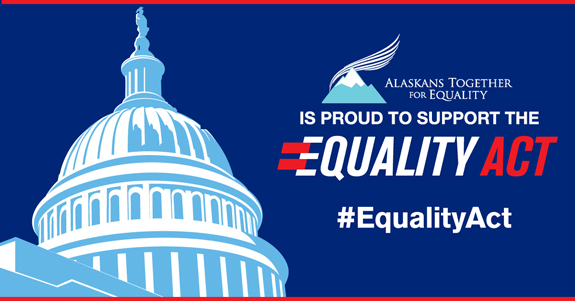 ANCHORAGE, Alaska -- Alaskans Together for Equality (Alaskans Together), Alaska’s largest member-based statewide lesbian, gay, bisexual, transgender, and queer (LGBTQ) civil rights organization issued the following statement today from board president Elias Rojas in response to the introduction of HR5, the Equality Act, in the U.S. House of Representatives:

“Currently, nearly half of Alaska residents are protected from discrimination by laws in their local communities. It’s not enough. By passing the Equality Act, the U.S. will be taking giant steps toward our national promise of liberty and justice — not for some, not for half, but for all.

“The Equality Act is an amendment to the Civil Rights Act of 1964 and the Fair Housing Act, two vital laws that have been protecting Americans from discrimination for more than half a century. These laws were enacted to ensure that no one is denied employment, education, housing, or other opportunities simply because of their race, sex, religion, national origin, disability, or familial status. It’s well past time to add sexual orientation and gender identity to that list of protected classes.

“Anytime legal protections for LGBTQ+ people are proposed, there is a vocal minority that insists that civil rights for others will somehow abridge their own personal rights. Some of the same arguments were made when the Civil Rights Act was debated, and again when the Fair Housing Act was proposed. Frankly, this opposition speaks to the absolute necessity of this legislation. The only people hurt by protections like those in the Civil Rights Act are those who want the freedom to punish others because they don’t like the way they look, live, believe, or were born. People who don’t intend to discriminate have no reason to object to laws that protect against discrimination.

“People are different. We have different beliefs and different values. There are differences we choose and differences with which we are born. You don’t have to like the way someone else looks, acts, thinks, lives, or loves. But this is the United States of America, and as long as they’re not hurting anyone, you have to respect their right to live freely.

“In the hierarchy of challenges facing LGBTQ+ people, basic legal protections are the most immediate, fundamental need. We would love to be able to reallocate the resources we invest in fighting for civil rights to address other vital issues, such as hate crimes against LGBTQ+ people and the devastating rate of suicide and self-harm among teens. We’re hopeful that Congress will do the right thing and pass the Equality Act so we can do just that.”