Today, both Sen. Murkowski and Sen. Begich, along with 66 other Senators on both sides of the aisle, passed a bipartisan immigration reform bill that would help lift 11 million undocumented immigrants out of the shadows. 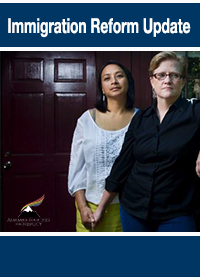 It is expected that of those 11 million, approximately 267,000 are LGBT immigrants. We applaud Sen. Leahy’s attempt to include LGBT binational couples in this legislation and for Sen. Begich’s courage in coming out in support of this amendment as a co-sponsor. Thankfully, due to the Supreme Court’s historic ruling that deemed the Defense of Marriage Act (DOMA) unconstitutional, approximately 28,500 same-sex binational couples will have an easier roadmap to citizenship.

Immigration reform, as passed in the Senate, included a 13-year roadmap to citizenship and a $40-billion amendment to increase border security by adding 700 miles of fencing along the border and 20,000 additional border security agents, among other details.

While there are portions of this bill that we do not agree with – i.e. the lack of protections for workers and the splitting of families – passage of immigration reform in the Senate was a historic moment and the first step in helping millions of undocumented immigrants.

This bill now rests in the hands of the House of Representatives. We urge our only Representative Don Young, to be a leader among his peers and work tirelessly to get immigration reform passed through the gridlocked House.