Alaskans Together For Equality Endorses Forrest Dunbar for Mayor 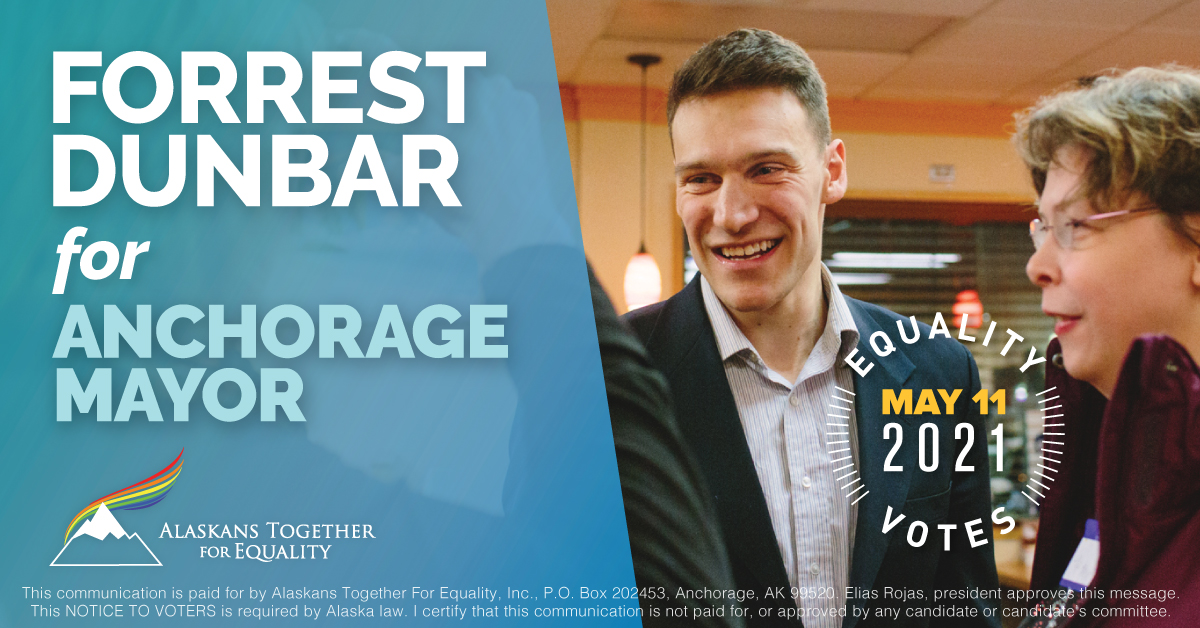 In the runoff for Anchorage mayor, there is only one candidate who supports the equal rights and inherent human dignity of LGBTQ+ Alaskans. Alaskans Together for Equality unequivocally endorses Forrest Dunbar for Anchorage mayor.

Dunbar has a strong record of supporting and advocating for LGBTQ+ issues. He was a strong supporter of the municipal ordinance banning harmful conversion therapy; knocked on doors as part of the campaign to defeat a proposed anti-transgender “bathroom bill”; promotes passage of the Equality Act at the federal level; and has committed to continuing his practice of working to diversify Anchorage’s government. In the ATE candidate survey, Dunbar described his support for anti-discrimination laws as “unwavering,” calling them “absolutely necessary”:

“I believe in civil liberties and I commit to defending the rights of LGBTQ+ people.”

On the other hand, Dunbar’s opponent, Dave Bronson, has a long and well-documented history of opposition to equal rights for LGBTQ+ Alaskans:

In summary, Mr. Bronson testified that it would “be nice” if the issue of gay marriage would “go away,” and claimed that “a small group of homosexual activists and their willing allies in the judiciary through very tortured logic determined that since homosexual employees of the state could not be married, they must be treated as if they are married and that is through same-sex benefits.”

Bronson called the desire for same-sex benefits “an incremental attack on the institution of marriage, with same-sex benefits used as a primary weapon in that attack,” and said that “activists will be at the door demanding same-sex marriage, and they will prevail.”

The audio of that testimony is available here.

While Bronson may have campaigned in front of a rainbow flag at a recent fundraiser, his public record speaks for itself: Bronson does not support equality. His supporters fear “the LGBTQ agenda.” And he wishes our marriages would just “go away.”

Anchorage residents will not be fooled by a candidate who wants to wrap himself in our colors while arguing against our right to exist, especially when we have the option to vote for a candidate whose record on LGBTQ+ issues is beyond reproach. For this reason, and many more, Alaskans Together for Equality supports Forrest Dunbar for mayor.

About Alaskans Together for Equality

Alaskans Together for Equality is Alaska’s largest member-based statewide lesbian, gay, bisexual, transgender, and queer civil rights organization. We are a non-partisan, civil rights organization whose mission is to advance civil equality for all Alaskans through grassroots organizing and advocacy, with a primary focus on lesbian, gay, bisexual, transgender, and queer Alaskans.

This communication is paid for by Alaskans Together For Equality, Inc., P.O. Box 202453, Anchorage, AK 99520. Elias Rojas, president approves this message. This NOTICE TO VOTERS is required by Alaska law. I certify that this communication is not paid for, or approved by any candidate or candidate’s committee.